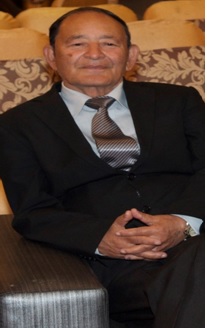 Born on 15th October 1933, Shri Krishna Bahadur Chettri had a humble beginning. Youngest amongst five brothers, he started his education in the village primary school, St. Xavier’s primary school, Dilaram and continued his secondary education at St. Alphonsus school in Kurseong. He completed his graduation from Darjeeling Government College and later on also did his LLB from North Bengal university. From a young age he had a desire to serve society and laid great importance on education. After college he had started a night school in his village to help and coach students from his village. He was active socially and involved himself in various social activities and later om joined politics. He became a member of parliament from Darjeeling and served his people as an appointed member from Rajya Sabha in 1971 and as an elected member form Lok Sabha in the year 1977.

Feeling the need for a good school for students from his village and other rural areas, he along with his wife started SAI SUNDARAM SCHOOL in the year 1983. It was a blessing for the village to have an English Medium School. The school which started as a primary school would blossom into a secondary school in the year 1999, and to a Senior secondary school in 2013 affiliated to the Central Board of Secondary Education, Delhi. Due to the constant efforts and dedication of our founding father, we have been blessed with a CBSE school in our village and we will always strive to keep his legacy alive.